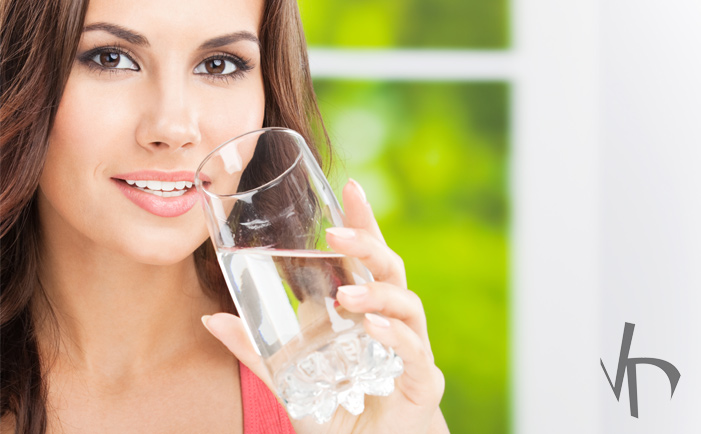 The cause of appearance of deposits may be poor-quality toothpaste, an incorrectly selected brush; too soft food; chewing only on one side of the jaw; violation of salt metabolism in the body; incorrect position of teeth or too rough surface. In addition, the appearance of tartar and deterioration of the teeth and gums is provoked with a bad environment - polluted air, poor quality water and food.

It is impossible to overestimate role of water in human life. The body of an adult is almost 70% of water. In all human organs there is water: in the heart, lungs, kidneys it is about 80%, in blood - 83%, in bones - 30%. When amount of water consumed and its mineral composition changes, the processes of hematopoiesis, digestion and assimilation of food are violated. Water acts as a conductor of heat, a vehicle, a solvent and a means of purifying the body. No less important it is for the body and mineral substances.

_Mineral substances that are contained in water affect the state of the whole organism in general and the structure of the teeth in particular. _

It is the basis of bone tissue; it is involved in maintaining ionic equilibrium in the body. When excessed, deposits of salts in kidneys and urinary tracts occur, and growth stops. With a deficiency, spontaneous contractions of muscle cells, convulsive contractions of the heart are noted; blood coagulation processes and normal bone formation are disrupted.

Lack of calcium affects the state of tooth enamel; it becomes soft and loses its main function – protecting teeth. Calcium is a vital element, without it a person could not live. Almost every cell, including cells of the heart, nerves and muscles, needs calcium to ensure normal life.

But the excess of calcium is also harmful, as well as the lack of it - the excess intake of calcium into the body, although it happens very rarely, can cause arthritis and arthrosis, also called salt deposition.

It participates in energy metabolism, formation of bones, utilization of vitamins, regulation of the work of nervous tissue. With excess of magnesium, there can occur displace of calcium from the bones, which can lead to osteoporosis and tooth decay. With a deficiency, it is possible to develop respiratory paralysis syndromes and cardiac blockade, irritation of the gastrointestinal tract.

Fluorine influence on the body is the most studied issue. The average daily requirement for it is 2000- 3000 μg, and 70% of this amount is received with water, and only 30% with food. With prolonged use of water, poor fluoride salts, develop a disease of teeth - caries.

No less harmful and excessive fluoride, it leads to another disease of the teeth - fluorosis, characterized by a peculiar mottled and brownish color of tooth enamel. Sometimes such a process can lead to complete destruction of the teeth.

Fluoride is a very dangerous and toxic substance, and the amount of sodium fluoride contained in a tube of toothpaste is a deadly dose for a child.

The scientific research on the harmfulness of fluorine, which appeared since the 1990s, showed its toxicity both for the whole organism, especially for the pineal gland (epiphysis); the accumulation of fluorine in it causes numerous disorders of immunity and internal regulation of the organism, reducing possibility of protection against free radicals and directly for the teeth. The disease, which develops with excess chlorine intake, causes almost complete tooth decay and thyroid dysfunction - just the same picture was observed not so long ago in one of the settlements in Russia where fluoride content in tap water was greatly increased due to the local aluminum plant, poorly cleansing its waste.

The consequence of these studies is that recently many countries, such as Japan, China, Austria, Belgium, Czech Republic, Denmark, Finland, France, Germany, Hungary, and other European countries have either banned or rejected proposals for fluoridation of drinking water. So brushing teeth with fluoride toothpaste twice a day is enough to prevent the lack of fluoride - fluorosis, and drinking fluoridated water can be even dangerous.

Iron also affects teeth - with its increased content in drinking water, the latter acquires a yellowish tinge, which, with a daily drink of such water, will very soon spoil your teeth. Also, a long-worn topic about the harm of nitrates for body is relevant here, also - with their increased content in drinking water, among other things, the risk of developing gum disease and dental caries increases.

Water hardness is determined by the content of soluble salts in it, primarily calcium and magnesium. Both these elements are involved in the formation of dental tissues. Therefore, at first glance, where water is depleted with calcium, teeth should break down more quickly, and where water is hard, visits to the dentist will be less. But not everything is so unambiguous, and for the most part the condition of teeth depends not so much on the quality of water as on proper hygiene, nutrition, general health.

If you live in a city where water is depleted of calcium, eat more foods rich with it, especially dairy, fish, and fresh greens.  Give preference to toothpastes, enriched with calcium and fluoride.

Try to drink less boiled water, because even the small amount of calcium that it contains is deposited on the walls of the kettle. Give preference to filtered, drinking bottled or mineral water.

And, of course, carefully care for your teeth and at least once a year do their professional cleaning with a doctor to remove tartar.

If you use mostly hard, fibrous food, then she will mechanically clean your teeth.

Cheese or sugar-free chewing gum also have some protective effect, because they create a high pH level, which makes the medium in the mouth more alkaline, and stimulate saliva secretion, which has weak buffer properties and prevents the formation of an acidic environment. Rough food supports the health of the gums and ligaments that fix teeth in them, stimulates mucous and normal blood supply.

Modern people feed on processed food, poor natural products, subjected to significant culinary processing, which worsens the conditions for self-cleaning of the mouth. Such nutrition does not stimulate intensive chewing, and therefore does not provide sufficient load on the teeth and periodontal tissues. In these conditions, rational hygiene is particularly important, since in the absence of it, food remains, products of putrefaction and fermentation, bacteria accumulate, which leads to the formation of plaque and stone.