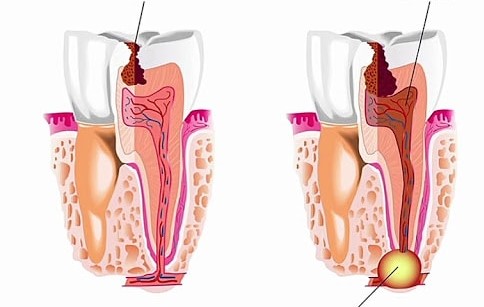 A dental cyst is a rather insidious and dangerous disease since the absence of its treatment can cause serious complications.

This pathology is a formation that manifests itself as the body's defense against inflammation, infection or mechanical damage to the gums and dental tissues. It consists of a cavity with dense walls, which is filled with a liquid-like or cheesy substance of yellow or gray color. The cyst on tooth root triggers the inflammatory process and affects the bone tissue. If you treat this pathology with carelessness and do not seek help in time, this will lead to serious consequences in the form of tooth loss, complications of concomitant diseases, the development of sepsis and other deterioration.

The Main Types of Dental Cysts

What is important to know about this pathology is that there are different dental cyst types, depending on the location of the disease.

A radicular cyst develops when the infection penetrates through the canals to the apex. From the granuloma as a result of pulpitis and an abscess, a neoplasm with pus develops. The borders of the cyst are clearly visible on x-rays. If there is no secondary inflammation, the pathology can develop for a long time without symptoms.

A residual cyst occurs as a result of improper removal of the tooth root or if an infection was introduced during treatment. In an attempt to localize the area, the body limits the focus of inflammation. At the place of the extracted tooth, a granuloma with pus is formed.

A follicular cyst often appears in childhood, when there is an active change of teeth. This pathology appears due to a violation of the formation of unerupted teeth at the initial stage. Such a cyst has liquid contents inside and an unformed tooth.

Retromorlar cyst is a pathology of the wisdom tooth, which is formed when the eruption is difficult due to chronic inflammation.

The reasons for the development of a pathogenic condition in an infection that penetrates the deep jaw tissues through the root canal. When a tooth is badly damaged by caries or the infection is not completely cured, inflammation occurs. The disease often develops under the installed crown due to an error in the work of the dental technician, poor-quality sanitation of the oral cavity, and mechanical trauma to the jaw. Also, one of the dental cyst causes is irrational prosthetics. It can cause an overload of individual elements of the dentition. In addition, a poorly functioning immune system and various infections of the oral cavity and nasopharynx also provoke the appearance of a cyst.

To identify the disease in time and seek treatment from a doctor, each person should know the dental cyst symptoms:

If the patient has one or more of these symptoms, it is important to immediately consult a doctor. Often the initial stage of dentigerous cyst development is not manifested in any way and is asymptomatic. Therefore, the problem is often detected in a triggered form. The sooner a pathology is detected, the better the prospect for a complete and successful cure.

Treatment of any disease begins with a diagnosis, and a dental cyst on the gum is no exception. To detect a pathological neoplasm, the following diagnostics are used:

If the patient has found signs of a cyst, you should consult a doctor without waiting for the next scheduled visit. It will help to find a suitable dental cyst treatment. Until a few years ago, the only treatment was removal, which was not suitable for some patients. Today, there are several ways of dentigerous cyst treatment.

The therapeutic method is carried out in the initial stages when the pathology is still small. Then it’s possible to treat the cyst without removal. In this case, the dentist removes all the affected tissues and the filling material that was previously used. After the manipulations, the doctor prescribes drugs that normalize and balance the acidic environment. So healthy tissues retain their viability, and the zones after therapy are restored.

However, sometimes a dental cyst removal procedure cannot be avoided. In this case, the cyst is removed completely. Such treatment is carried out if it is large, located in a hard-to-reach place, or provoked complications. If the pathology is not running, then an operation with the preservation of the tooth is possible. In this case, the dentist removes only the cyst or part of the tooth.

If the tooth root is destroyed and cannot be restored, then the removal of the cyst along with the tooth is used to stop the development of inflammation. After the operation is completed, the patient is prescribed antibiotics and sanitation of the oral cavity. As usual cyst after tooth extraction no longer appears. The recovery period takes about two weeks.

A tooth cyst is a serious and dangerous disease, as the patient may not notice it for quite a long time. It is considered a benign tumor, but if it is not detected and treated in time, the cyst can cause tooth loss. Since a cyst is a fairly common disease of the tissues of the jaw, dentists recommend that patients of all ages, lifestyles and oral conditions regularly visit the dental office and undergo an examination by a specialist. This will help prevent the onset of the disease and its development into more dangerous forms.