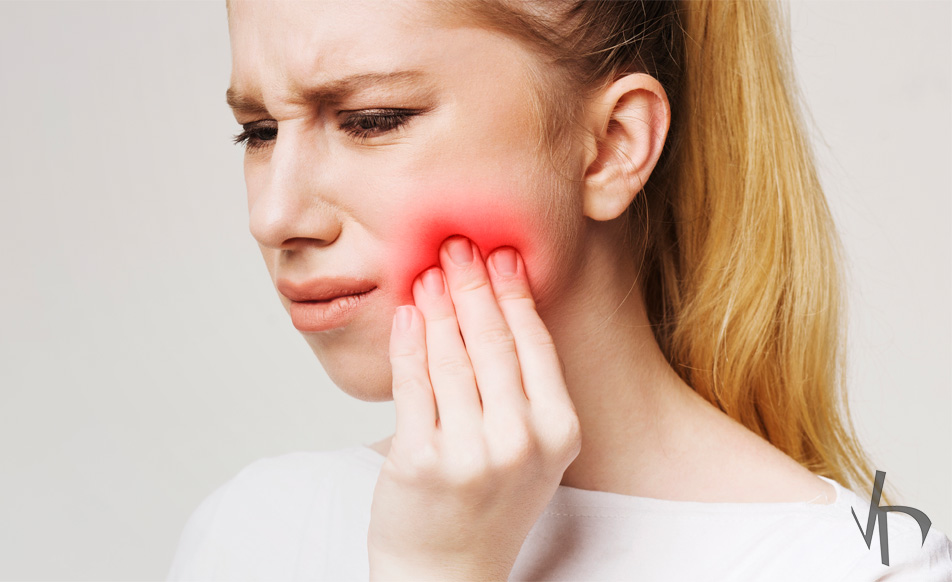 Pulpitis is a dangerous issue and may cause lots of problems if not treated in time. Basically, pulpitis is swelling of the tooth. There is a great variety of things that may cause pulpitis, but what you need to know are signs and symptoms of it. Let’s look at them in detail.

If you’re diagnosed with pulpitis, it means that enamel and dentin of the tooth are damaged and it allows for bacteria to inflame the pulp. The root of the problem might be dental caries, mechanical damage, or a simple erosion of the tooth. We feel pain because when the pulp is inflamed, the pressure starts to build up inside the pulp cavity. It is influencing the nerve of the tooth as well as neighboring tissues. It’s so painful because the pulp is surrounded by dentin, and the pressure simply cannot dissipate through such a hard material.

The pressure that is constantly applied to the tooth nerve can be so much that the patient wouldn’t be able to locate the problematic tooth, because it’d be confusing. It’s called referred pain, when all the surrounding area seems to be in pain, even though it’s caused by an inflammation inside one single tooth.

But what if the patient’s teeth are denervated? Well, that’s not very good as it can lead to irreversible pulpitis. People whose teeth are denervated deal with teeth problems more often and the pulp heals not as quickly. Sometimes pulpitis can occur after an appointment with the dentist. If you got a filling and it hurts, it may be because of pulpitis. It usually is reversible and it goes away on it’s own. However, if pulpitis pain is severe and doesn’t go away you should consult a doctor. Pulpitis after filling happens from time to time and most doctors can consult you on that.

Diagnosing pulpitis isn’t very challenging for an experienced dentist. They may take one or two X-rays to find out the tooth’s state, and they also use pulp sensibility tests. Thermal sensibility test is basically applying a cold, hot or sweet stimuli to the tooth and seeing how it responds. For cold stimulus they often use ethyl chloride. It is sprinkled onto a small piece of cotton or wool and put onto the tooth to produce intense cold. For heat tests, gutta-percha can be heated and put onto the tooth as well, to produce intense heat.

There’s also an electrical pulp test. It requires the dentist to know the pain threshold of the patient, to interpret the results carefully and to follow the procedure closely. This is not easy as the tooth may provide a false-positive reaction. It’s usually used to determine if the pulp is vital or not by seeing how much of it is damaged.

There’s a third way of diagnosing pulpitis which is invasive and, therefore, irreversible, it’s called test cavity. The dentist cuts into the dentine of the tooth to test it’s sensibility. This method is not widely used in general practice as it doesn’t give the dentists more info than the two tests mentioned above.

Pulpitis treatment methods may differ on whether the patient has reversible or irreversible pulpitis. If it’s reversible, the dentist gets rid of the irritant and restores the pulp cavity, and the pulp heals itself afterwards. This requires the pulp to be still intact and vital. The dentist removes the decay and places the restoration, and the pulp heals on its’ own. If the patient’s pulpitis is irreversible, it doesn’t necessarily mean that the pulp is “dead”. It means that it can’t be saved because it wouldn’t return to its’ normal state if the dentist just removes the cause of the inflammation. So the dentist may choose to do pulpectomy. The pulp is removed and the area left in the tooth is disinfected and sealed. The alternative solution is tooth extraction. This is only done when the tooth is considered dead and cannot be restored.

There are two types of pulpitis: reversible and irreversible. Both are caused by inflammation of the tooth pulp. Without the right treatment, pulpitis might become irreversible, so you should always go see your dentist as quickly as possible when you feel the pain. If it’s not treated early, the patient might lose the pulp.

We should say that pulpitis can be easily avoided with good oral hygiene and regular check-ups. Follow all the instructions your dentist gives you and you should be fine!